Rana Khurram Ali asks people, and leadership to think about making Pakistan a country that is respected, and sought after by the world

LAHORE: Speakers during day-long colorful celebrations regarding national independence day recounted sacrifices and struggles which led to the creation of Pakistan, and urged people to remain united and work hard for social and economic development.

Pakistan’s independence day was commemorated in a simple and dignified manner by the Foodies & Friends [FnF], a community that started as a social media platform for food lovers and turned into a source of learning, and opportunities to grow, and a home where they have found friends like family. 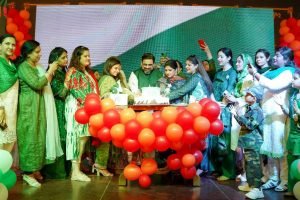 Rana Khurram Ali, the founder of the Foodies & Friends, told the audience that everyone must try to transform Pakistan into a diverse, multicultural, and tolerant society as per the vision of Quaid-e-Azam Muhammad Ali Jinnah. He asked all the citizens and leadership to do some course corrections and think about making Pakistan a country that is respected, valued, and sought after by the world.

In a candid talk, he also informed the audience that he founded this vibrant platform about five-year ago with a dream to change life of homemakers. During this five-year time period, he said that this platform played a major role in talent promotion, and women empowerment by arranging healthy activities. It is pertinent to mention here that this platform is working with major brands and providing opportunities to women which includes setting up their businesses.

At the event, members of this platform gathered in all greens and whites, kids dressed in traditional national dresses, and even some kids dressed as soldiers and Fatima Jinnah to celebrate the independence day celebrations. A drum circle was arranged where all members play drums and celebrated the event. A national song competition was also held where more than 35 people from different cities participated. 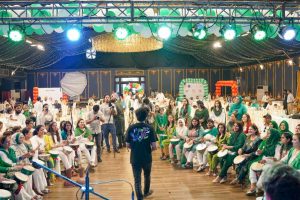 On the occasion, Asma Khurram, Sadia Kashif Nazir, Fatima Butt, Nisa Anwar, and Umbreen Mahar also paid tributes to heroes of the national independence and explained different initiatives of the Foodies & Friends during previous years and this platform is now a second home for many people. Rana Khurram Ali congratulated all members on celebrating independence day. He also highlighted the biography and lifelong struggle of Quid-e-Azam Muhammad Ali Jinnah for attaining of a separate homeland.

Upcoming weeks are important for Power Sector reforms in Pakistan