These were the words of Iranian Consul General Mohammad Reza Nazeri during his visit to the Lahore Chamber of Commerce & Industry on Thursday.

Reza Nazeri further said that if someone wants to travel to Tehran, he can reach there in less than three hours as a direct weekly flight from Lahore to Tehran is starting from next week.

He said Iranian and Pakistani businessmen have a strong relationship which is strengthening by every passing day, adding that Pakistan and Iran and LCCI and Iranian Consulate should work more to further reinforce the relationship and cooperation.

Iranian Counsel General said that before the COVID-19 outbreak, our ambassador to Pakistan and the LCCI has agreed to hold webinars between chambers to explore the trade opportunities between two countries, adding that, due to Corona the plans were delayed and we hope that now as the situation seems better these webinars will be held along with the Persian language courses in the LCCI.

He also congratulated the LCCI former President Sohail Lashari on becoming the President of the Pak-Iran Joint Chamber of Commerce. 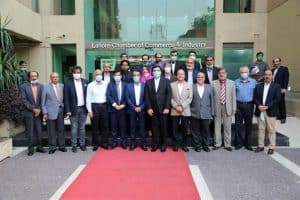 President of the Lahore Chamber of Commerce and Industry Mian Tariq Misbah said that LCCI takes pride while quoting the excellent working relations between Lahore Chamber and Iran Consulate in Lahore.

He said there are hundreds of LCCI members who have benefited from maximum facilitation from your side especially through honoring LCCI’s recommendation for granting visas. Both the countries have large domestic markets and unique geo-strategic competitive advantages but we have yet to enhance our trade volume by making use of these opportunities.

Mian Tariq Misbah said the potential sectors where Pakistan and Iran can enhance Trade are value-added Textiles, Pharmaceuticals, and Rice. Iran is one of the biggest consumers of Denim in the region while Pakistani rice has a strong market in Iran. There is also great potential for the pharmaceutical industry in Pakistan to enhance its exports by tapping the Iranian market.

Senior Vice President LCCI Nasir Hameed Khan said that we are well aware of the fact that lack of sound Banking Channels is the prime cause of this low trade volume. Both Iran and Pakistan should collaborate to devise a specialized mechanism for enhancing trade. The presence of an Iranian financial institution in Pakistan can greatly help in this regard. It is also high time for both countries to make progress in the Barter Trade mechanism for facilitating trade.

Vice President Tahir Manzoor Chaudhry said through ensuring strict vigilance on both sides on smuggling & undocumented trade, we can also improve the figures of bilateral trade, adding that we are hopeful that once the COVID situation improves, there will be a regular exchange of export-oriented delegation which would facilitate in a B2B interaction, adding this will help both sides in strengthening their knowledge about each other’s markets.