The National Minorities’ Day was observed on Thursday to honor religious minorities who have contributed to Pakistan’s creation in 1947 and in nation-building.

Punjab Human Rights and Minority Affairs Department, in collaboration with FACES Pakistan, organized an event in a local hotel on “Religious Diversity and Economic Development. On the occasion, FACES Pakistan President Javaid William presented a book – Our Diverse Land – to Archbishop Sebastian Francis Shaw, and another book – Parcham Jaisay Log – to the guests. 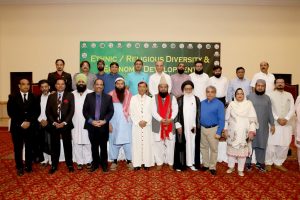 Addressing participants, Human Rights and Minority Affairs Secretary Rizwana Naveed said that the commendable services of religious minorities are a glorious chapter in Pakistan’s national independence movement. She said that the minorities have given a considerable contribution in different fields, including education and health. She reaffirmed the government’s resolve for the betterment and welfare of the minorities and their inclusion in national life.

Archbishop Sebastian Francis Shaw while addressing the audience said that all communities must act now to solve problems ranging from poverty to inequality of opportunities. “We must continue to respect the sacredness of every human life,” he said and appreciated the efforts of religious minorities in economic development, and the social welfare sector. The National Youth Council for Peace and Interfaith Harmony staged a drama while Aftab Javaid presented a poem on the occasion.

“You are free to go to your temples; you are free to go to your mosques or to any other place of worship in this state of Pakistan. You may belong to any caste or creed that has nothing to do with the business of the state,” this was a policy statement of Quaid-e-Azam Muhammad Ali Jinnah in his opening speech to the Constituent Assembly on 11 August 1947.