MUZAFFARABAD – The Pakistan Tehreek-e-Insaf (PTI-AJK) has claimed substantial victory in Sunday’s parliamentary elections for the 53-member Legislative Assembly of Azad Jammu Kashmir.
Currently, the party does not have full majority seats in the new Legislative Assembly, PTI’s AJK leadership is expected to win over necessary lawmakers from independents and smaller parties, according to political commentators.

Perhaps, ‘Naya Kashmir’ is the dream of ‘every’ Kashmiri, particularly of those who are below 30. Therefore, one could be moderately optimistic about PTI’s claim for a ‘Naya Kashmir.’ In a tweet, Federal Minister for Information Chaudhary Fawad Hussain said that all Kashmiris clearly supported the vision for ‘Naya Kashmir.’

The hope for a better future is more important for the young people in Azad Jammu Kashmir, as they have been deprived of opportunities in the past. The local population simply demands accountability, transparency, and the rule of law that is participatory, responsive, equitable, and inclusive.

Talking to journalists, Chaudhry Fawad Hussain said that India was very upset about the certain victory of Imran Khan’s Pakistan Tehreek-e-Insaf in the Azad Jammu Kashmir elections. In today’s elections, the Kashmiris have overwhelmingly voted for the PTI candidates and the party will form the government in Muzaffarabad. 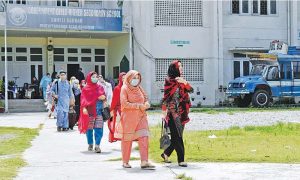 It is pertinent to mention here that the much-awaited elections concluded with the Tehreek-i-Insaf emerging as the top victor in Azad Jammu Kashmir. According to unofficial results, the Tehreek-i-Insaf received substantial gains in Sunday’s elections and was to form a government in the state.

The Election Commission data showed that 691 candidates, including 381 members of 32 registered political parties and 310 independents, participated in the general election for a 53-member Legislative Assembly. Among 45 general seats, there are 12 seats for Kashmiri refugees settled in different cities of Pakistan, and eight seats reserved for women, technocrats, overseas Kashmiris and Islamic scholars.