Lahore – The Lahore Chamber of Commerce and Industry on Monday gave an SOS call to the government for early compensation to affectees of the Hafeez Center tragedy.

The Hafeez Center tragedy has caused irreparable damage to the property, shops, and businesses of thousands of people, the effects of which will be felt for decades to come. Traders, shopkeepers, and people associated with Hafeez Center should be redressed and the government should formulate a plan of action to compensate them for their losses.

They appreciated the services of the media and said that “we pay tribute to the media for the diligence with which they covered the incident throughout the day, adding “the performance of rescue, police, army, disaster management, district administration, and allied agencies is also commendable”.

Officials of LCCI said that they were deeply saddened by the tragedy at the Hafeez Center. The business community already has many problems because of Corona and this tragic incident has caused an irreversible loss to the businesses.

“We welcome the move as the government has immediately constituted a 14-member committee which will submit its preliminary report in 24 hours and a full report in a week estimating the losses,” they said.

They said that the Lahore Chamber extends its heartfelt condolences to the business community of Hafeez Center and demands immediate redressal of their grievances. “We demand that the government immediately announce cash compensation to the affected businessmen as soon as the loss estimate report is received”, they added.

They informed me that the business community contributes Rs. 626 billion in Custom duty, Rs. 250 billion Federal Excise Duty and Rs. 1596 billion in sales tax to the national exchequer.

The government should play its leading role in rehabilitating the building of Hafeez Center and should also bear the expenses incurred in this regard. This work should be done on a War Footing Basis. 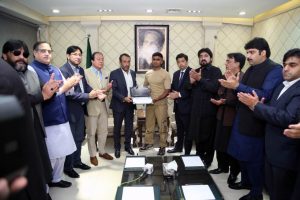 The Lahore Chamber of Commerce and Industry (LCCI) presented a certificate of honor, shield, and a cheque of Rs. 50,000 to soldier Intezar Ali for saving lives and property of people in Hafeez Center without caring for his life.

Soldier Intezar Ali entered the Hafeez center to evacuate the trapped people without caring for his own life. While saving others Intezar was himself trapped when a burning shutter of a shop fell on him, Not only did he get himself out but he also got more trapped people out of there safely.

In recognition of his bravery and courage, Lahore Chamber President Mian Tariq Misbah, Senior Vice President Nasir Hameed Khan, and Vice President Tahir Manzoor Chaudhry presented the award to soldier Intezar Ali and said that the sacrifices made by the Pakistan Army and the services rendered to the people of Pakistan are matchless.